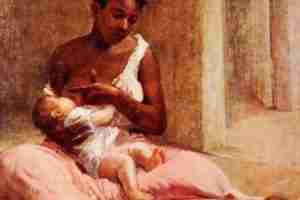 Breastfeeding with wet nurses in the 18th century was a common occurrence. There were many reasons to wet nurse: white women claimed breastfeeding was too time consuming, it was often considered uncultured, or they argued that it ruined their figures. Sometimes they wanted to quickly get pregnant again and thought it would happen faster if they didn’t nurse. In an attempt to avoid breastfeeding, flour or cereal mixed with broth were introduced as milk substitutes, but this was unsuccessful.
Slave owners then found another way to exploit enslaved Black women: wet nursing. White women manipulated the motherhood of Black women for their own advantage. White women would often time their pregnancies with that of their slaves to ensure they had a wet nurse available. Enslaved mothers were often forced away from their own babies to feed their slave owner’s babies. If they were allowed to continue to feed their own baby, the white and Black babies were to have separate breasts so as not to “contaminate” the milk going to the white baby. Their own babies were often wet nursed by other enslaved women who were responsible for nursing multiple Black children.
After the Civil War, that power dynamic continued with women of color working as wet nurses. Breastfeeding was not a choice but a forced job, becoming a source of physical and emotional trauma on top of the traditional forms of slave labor.
— Julie Matheney // @lalactation