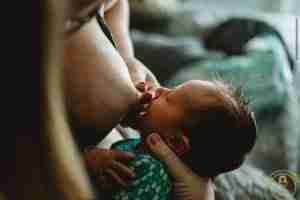 Babies mouths have two areas: the hard, bony palate up front and the soft palate at the back, just in front of where that little hangy downy uvula is. One of the reasons a nipple erects, averts, and stretches is to help to get it in the safe zone where the palate is soft. When a baby is latched correctly, the nipple tip stretches back to where the palate is soft, then the tongue massages the nipple to express milk. If baby has a shallow latch, the tongue pinches the nipple tip against the hard roof of the mouth and causes damage. This also happens when there is a tongue tie where the tongue is restricted in its movement. Instead of the middle of the tongue massaging the nipple, the the tongue is anchored to the floor of the mouth and it flicks the nipple, or the middle of the tongue where the restriction is pinches the nipple against the bony palate.
Nipples are perfectly designed to withstand breastfeeding. Other than temporary tenderness in the first few days, there should be no pain or damage. If you do get damage, they should heal quickly (within 24-48 hours) if you can get a consistent deep latch. Moist wound healing is most effective to heal a nipple.
Tips to heal a damaged nipple:
*Keep breast milk on the nipple. Using a washable breast pad can help keep milk on the nipple
*Nipple balms/butters, coconut oil and lanolin can help keep the nipple from sticking to clothing and feel soothing
*Breast gels
*A 20 second saline rinse once or twice a day
*Soak the nipple in an Epsom salt bath, either in a bowl or Haakaa filled with warm water
*A prescription for Dr Jack Newman’s All Purpose Nipple Ointment for severely damaged nipples
*Silverette cups for persistent damage
*Temporarily use a nipple
*Schedule a lactation consultation time get to the root of the damage.
Happy latching!
GraceFull Lactation Consultant- Julie Matheney IBCLC